Volume IV: Sermons Preached at the Inns of Court 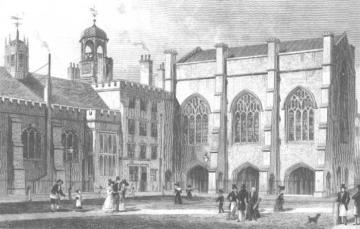 This volume will include the sermons that Donne preached at Lincoln’s Inn in the first years of his employment as the Society’s preacher as well as that preached at the Temple, a comparable legal congregation. In Potter & Simpson’s edition these sermons were interspersed with sermons preached in different pulpits across three different volumes. As a consequence the unique qualities of the Lincoln’s Inn sermons which not only show Donne preaching in a specific institutional context, but also reveal him addressing a congregation to which he was personally connected through numerous friendships, were lost. The volume will restore this important dimension to the sermons, framing them with a scholarly introduction which will draw attention to the specific character of the Lincoln’s Inn pulpit, detailing the history of preaching in Lincoln’s Inn, the constitution of the congregation, and the arrangement of the chapel preaching space (and, although a pulpit with which Donne had less personal connection, a proportionate amount of detail will be provided for the unique sermon preached at The Temple).

Crucially, an awareness of the institutional context of preaching at the Society will allow the volume to reconsider completely the canon of Lincoln’s Inn sermons as it is defined in Potter & Simpson’s edition. Thus, for example, a renewed attention to how Donne’s sermons to the Society were usually part of a series of sermons, means that the sermon on Colossians 1.24 can be more specifically dated to before January 1620. It will also be possible to suggest a tentative re-dating of the sermon on Psalm 38.9 from spring 1618 to winter 1620.

The contextual framework will not only allow for renewed attention to the canon of Donne’s Lincoln’s Inn sermons, however. The volume will also employ recent work which has demonstrated how the context of Lincoln’s Inn influenced the content and tone of Donne’s sermons in particularly distinctive and significant ways not understood by Potter & Simpson. Firstly, Lincoln’s Inn was one of the venues in which Donne was able to preach most explicitly on politico-religious debates of the period. The chapel of Lincoln’s Inn was exempt from the jurisdiction of the Bishop of London, and the freedoms this brought were accentuated by the close-knit nature of the Society in which members’ ties of professional loyalty could overcome political and religious difference. Consequently these sermons, in particular the Valediction sermon, provide crucial evidence on Donne’s stance on heated political and religious debates of the late 1610s and early 1620s, such as England’s involvement in the war in the Palatinate and the treatment of recusant Catholics. Secondly, these sermons show Donne using his pulpit oratory to develop a very specific, and arguably distinctly pastoral, preaching relationship with his congregation. Not only do the sermons contain the sorts of legal references which would be appreciated by a legal congregation, but sermons such as the final four sermons in this volume, which constitute part of a series on paradoxical or contradictory texts, show Donne specifically tailoring his sermons to a congregation which especially valued witty, intellectual preaching.

Of especial importance during Donne’s time at Lincoln’s Inn was the design and construction of the new Lincoln’s Inn chapel (consecrated 1623). This volume will draw on newly discovered manuscript evidence and recent research into the architectural design of the new chapel in order to provide, for the first time, an exact understanding of the venue that was the subject not only of the sermon Donne preached to the Society as they prepared to build it, but also the sermon he preached at its solemn consecration in 1623 (included in Volume V).

Although these Lincoln’s Inn sermons seem to have been among the most popular in Donne’s lifetime, with an especially large proportion appearing in manuscript, they have received comparatively little attention in recent studies, with preference being given to those preached in the more politically central pulpits of the court and Paul’s Cross. This volume will thus constitute a crucial intervention in the study of Donne’s sermons, bringing to wider attention sermons which offer a unique insight into both politico-religious and rhetorical dimensions of Donne’s preaching.