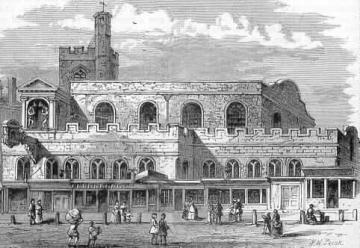 The sermons that Donne preached as vicar of the City parish of St Dunstan’s-in-the-West have tended to be overshadowed by the more high-profile sermons preached at Whitehall, Paul’s Cross and other major public venues.  This edition provides an opportunity to take a fresh look at the parochial sermons and reassess their place in Donne’s career.  Surprisingly, they have never been printed together as a group; instead, they are scattered through the three seventeenth-century folio volumes of Donne’s sermons, and divided between three non-consecutive volumes (6, 8 and 10) of the Potter & Simpson edition.  Yet it makes far better sense to consider them as a group, not only because they were all delivered within the space of a few years (1624 to 1631) but because they are stylistically distinct, showing how Donne adapted his late preaching style to the needs of a mixed congregation.

Any consideration of the parish sermons needs to start by acknowledging that Donne was a pluralist, who held the living of St Dunstan’s in conjunction with two other livings (Sevenoaks in Kent, and Blunham in Lincolnshire) as well as the deanery of St Paul’s.  This has always been a source of embarrassment to Donne’s biographers.  Walton claimed, disingenuously, that Donne’s accepted the living of St Dunstan’s so that he could be ‘charitable to the poor, and kind to his friends’ and make adequate financial provision for his children.  Bald, too, resorts to some special pleading to justify Donne’s behaviour (‘his was not the flagrant pluralism of some of his contemporaries’).  Yet Donne himself was clearly uncomfortable on the subject of St Dunstan’s, and resorted to some very strained logic to explain why he was ‘not so bound, as the world thinks, to preach there’, arguing that he drew his income from the parish not ‘as a Church-man’ but as the lessee of the lay impropriator (the Earl of Dorset) to whom he paid an annual rent.

Reading between the lines of the St Dunstan's sermons, it appears that Donne’s appointment was not welcomed by everyone in the parish.  In his first sermon at St Dunstan’s (P&S VI: 3) he argues that the relationship of a minister to his people is analogous to that of a husband towards his wife.  This, of course, begs some very awkward questions: what if a minister has more than one living? is this a form of spiritual adultery?  A close reading of the sermon shows how Donne skirts delicately around these issues, indirectly justifying pluralism by analogy with Old Testament polygamy, but never confronting the problem directly.  Bald, in his biography of Donne, comments that ‘one wonders as one reads the sermons whether there had not been some feeling in the parish against Donne’ (though, typically, he can’t quite bring himself to accept this, preferring to believe that Donne was ‘guarding himself against the discontent that had accumulated during the tenure of his predecessor’).  Donne himself admitted that some people ‘have defamed me, of a defectiveness towards that Church’, and that he felt obliged to meet these criticisms by preaching there regularly.

The St Dunstan’s sermons are ripe for reconsideration, and this proposed new edition is an ideal opportunity to look at them again, in detail, with particular attention to signs of conflict or friction between Donne and his parishioners.  At present, most of what we know about Donne’s involvement with the parish comes from two articles by Baird Whitlock (‘Donne at St Dunstan’s’, TLS, 16 and 23 September 1955), who went through the churchwardens’ accounts and vestry minutes (now in the Guildhall Library) and pulled out all the references to Donne.  These are an immensely useful source, but they are skewed towards the wealthy members of the parish and may present a misleading picture of parochial harmony.  (Thus Potter & Simpson: ‘They give us a very pleasant picture of the good relations between Donne and the church officials .. The parishioners were proud of their Vicar’s high position and of his fame as a preacher, and they found him kindly and affable ..’)  In other respects, too, the existing literature is inadequate – for example, even such basic facts as the size of the parish, and the number of people who might have been present to hear Donne preach, are not clearly set out anywhere.

My introduction to the volume will attempt to set the sermons in context, by presenting a detailed overview of the parish and its inhabitants.  It is high time to look again at the parish records, since (as far as I can see) no one has looked at them since Whitlock, now more than half a century ago.  But there are other sources which may also shed light on the history of the parish, such as visitation records and libri cleri (which may tell us more about the other clergy who served the parish), the records of London tithe disputes in the 1630s (e.g. Lambeth Palace Library MS 272), and the papers of the lay patron, the Earl of Dorset, relating to the parish (Centre for Kentish Studies, U269/T98); plus the work of Ian Archer, Julia Merritt, Peter Lake and others, which has vastly expanded our knowledge of parochial and social relations in early modern London.  In short, this is the perfect opportunity for a radical reappraisal of a neglected group of sermons (and a neglected aspect of Donne’s career), in accordance with the overall rationale of this edition in grouping the sermons by genre.