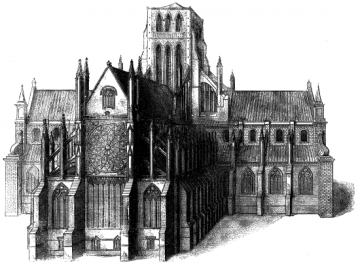 This, the first volume of a planned six in this edition containing Donne’s sermons preached at St Paul’s cathedral, demonstrates very dramatically the benefits of the edition’s defining principle:  presenting the sermons grouped according to place of preaching.  Whereas Donne’s other major venues – the court, Lincoln’s Inn, and even St Dunstan’s-in-the-West – have begun to receive some degree of attention in scholarship, St Paul’s has not.  This is due largely to the almost total absence of published work (mostly thanks to the destruction of so many cathedral records in the Great Fire of 1666) on how the cathedral was governed and how its worship and preaching patterns evolved over the early modern period.  We therefore know the least about the venue where Donne in fact preached the most.  The Oxford Edition of the Sermons of John Donne will make a groundbreaking contribution by, for the first time, thoroughly documenting preaching routines at St Paul’s (building on extensive work by Mary Morrissey that is nearing publication, and on further work by myself and the other editors), and describing the peculiar makeup of a cathedral congregation.  In addition to Donne’s statutory commitment to preach on Christmas, the Conversion of St Paul, Easter, and Whitsunday (sermons attended by the mayor and aldermen of the City), and his addition of Candlemas to that decanal rota, he also joined in an expanded rota of sermons preached by himself and other prebends on Sunday, Wednesday, and Friday afternoons during term-time (these, and the cathedral observance of terms, have never before been noted).

As with all first volumes in the edition that are followed by subsequent volumes devoted to the same venue, the introduction to Vol. X will set-out in detail the contextual information about St Paul’s which can the be efficiently drawn upon, summarized, and cited by the editors of the ensuing volumes for the venue.  The introduction will situate the volume’s contents in terms of Donne’s promotion to the cathedral deanery (November 1621), stressing the innovative seriousness with which he quickly expanded the preaching presence of the dean and prebends, and how his first year in the cathedral pulpit coincided not only with acute public anxiety over religious war on the continent, but also had to negotiate the promulgation in August 1622 of James I’s controversial ‘Directions for Preachers’.  An awareness of this same historical context makes possible several bold redatings of sermons based on internal evidence that was not fully attended to by Donne’s most recent editors (Potter & Simpson).

The volume opens, appropriately, with the sermon that Donne subsequently described from the same cathedral pulpit as ‘the first time that I ascended to it’ – Christmas day, 1621 (on John 1.8).  It is, as Potter & Simpson recognized, a stunning debut that is grand in its eloquence as well as in its self-consciousness as a ‘manifesto’ for Donne’s mission as a preaching dean.  Two subsequent sermons also in this volume – Midsummer Day and October 13 – were preached on the same text in a linked three-sermon series that was announced in the first instalment on Christmas day.  Here is vibrant evidence of how Donne not only planned ahead, but also how he carefully crafted his sermons for very specific congregations, the continuity of whose attention and memories he expected to stretch not just between Sundays, but across months, terms, and even years.  Clear continued engagement with John 1.8 supports the reassignment of the Whitsunday sermon from Potter & Simpson’s suggested 1623 to its place here in 1622.  It should be seen as part of Donne’s linked ‘manifesto’ sermons in his new cathedral post.  This is a dating further supported by its engagement with ‘this affaire’, a 1622 print war over predestination, reprobation and ‘the unpardonable sin’ that could not have been pursued by Donne in 1623 (after the ‘Directions’ moratorium on pulpit debates of precisely this sort).  Also inserted before the August 1622 ‘Directions’ watershed is an undated sermon ‘Preached at Saint Paul’s’ on 2 Cor. 5.20.  Potter & Simpson venture not even a guess about the sermon’s date.  This editor is convinced, though, that it is a very early cathedral sermon, based first on its allusion to ‘a late Synod’ (certainly Dort, 1618), and the absence of any of the tell-tale signs of promulgating the 1622 ‘Directions’.  More importantly, it is a sermon about the proper relationship between a preacher and his congregation (very similar in tone to those preached to his new parochial congregation of St Dunstan’s in 1624), the whole premise of which is charitably but firmly to lay-down rules for engagement between a new incumbent and his congregation.  As such, the sermon is so saturated with evidence about the social make-up and behaviour of the St Paul’s congregation, as well as Donne’s mission as their dean, that it will be invaluable in this first volume of St Paul’s sermons.  In sharp contrast is the post-Directions, final John 1.8 sermon (October 13, 1622), which, through its discussion of the ‘office’ of John the Baptist, advises non-controversial preaching (and hearing), condemns private interpretations of ‘dark places’ in scripture, and strenuously defends clerical authority.  Similarly, the sermon for All Saints’, otherwise undated but ascribed to 1623 by Potter & Simpson, is presented here as a further 1622 exposition of the ‘Directions’, given its emphasis on catechizing as the preferred alternative to excessive preaching.  Potter & Simpson’s dating relies on the sermon’s allusion to a threatened relaxation of penal laws against Catholics, which they only anecdotally associate with 1623 (whereas, as shown in recent work by Jeanne Shami, the issue was already a very live one in the winter of 1622).  This volume then confirms Potter & Simpson’s assignment of an undated sermon on Psalm 90.14 to winter 1622, based on its unambiguous references to protestant losses in the Palatinate.  Donne’s second Christmas sermon, 1622, is firmly dated in the early print witnesses.  Finally, the sermon for Candlemas (Feb. 2) presents an acute challenge for dating:  the subtitle’s identification of its text (Rom. 13.7) as a lectionary text for ‘that day, that yeare’, narrows the choice sharply to either 1617 or 1623, but, in turn, requires one of two mutually-exclusive venues:  either Lincoln’s Inn in 1617 (thanks to Emma Rhatigan’s correction of Potter & Simpson’s erroneous claim that Candlemas was not a ‘grand’ sermon day at the Inn), or St Paul’s in 1623.  To complicate matters, there is internal evidence to support both possibilities:  a direct address to lawyers (‘when in your judiciall proceedings in criminall causes...’) suggests Lincoln’s Inn; but similar addresses to ‘merchants’ and ‘Magistrates’ would be more appropriate at St Paul’s before the mayor and aldermen; and, the defense of the church as ‘the house of prayer’ in which ‘preaching may be left out’ would have been highly unlikely in 1617, yet typical ‘post-Directions-Donne’ in 1623.  The weight of the latter evidence sways the present editor to take, as a working assumption, that this is a St Paul’s sermon for Candlemas 1623.  (It is likely that further work on the attendance at cathedral sermons by City dignitaries will show such attendance by judges as well as members of the Corporation, which would then account for the legal address in the sermon.)  However, it must be stressed that, as is the case with any as-yet-debatable datings throughout the edition, the editor will be alert to evidence that may emerge during the work of annotating which may require the reassignment of a sermon to another volume (in this case, to vol. IV, Lincoln’s Inn).