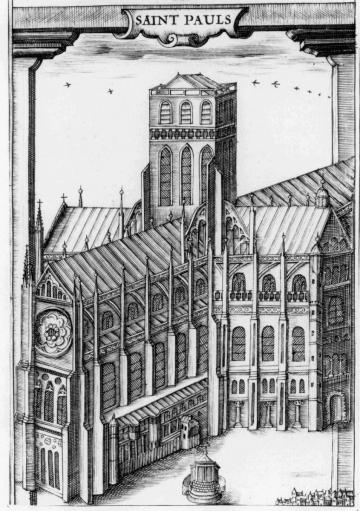 This is the fifth and final volume in the Oxford Edition of the Sermons of John Donne (OESJD) devoted to sermons preached at St Paul’s Cathedral while Donne was Dean: its last sermon, here dated to Whitsunday (16 May) 1630 is the latest to survive from the venue where Donne preached most often. All but one of the sermons contained in this volume were preached on days prescribed by Donne’s decanal obligations (Christmas, the Conversion of St Paul, Easter, and Whitsunday), or by his own addition to his rota (Donne chose also to preach on Candlemas: Sermon 11). The one exception is the sermon preached on 23 November 1628 (Sermon 4). The institutional setting of St Paul’s, including details of cathedral governance, patterns of worship and preaching, and attendance at service, will have been outlined in detail in OESJD Vol. X (ed. Peter McCullough), and this volume will efficiently recapitulate that contextual information in its introduction. Work by editors of earlier volumes in the St Paul’s group (Vols. X–XIII) will also facilitate comparison between sermons preached at different dates on the same religious holidays. These range from the most immediate and basic (Sermon 3 was preached on the same biblical text as Donne’s previous Whitsunday sermon, of 1627 (contained in OESJD Vol. XIII), and refers explicitly to that fact) to broader doctrinal and pastoral concerns (the Christmas sermons – nos. 5 and 9 – focus on the importance of the instituted church, and on the duty of its members outwardly to manifest and perform their devotion to God).

While the nature of a religious holiday and its associations – both theological and local – might determine some aspects of a sermon, however, there is as much variation as continuity in Donne’s preaching during this period, and this volume offers a rich collection of sermons that range from the politically-engaged, to the doctrinally disputatious, and the theologically reflective. There is no clear and easy development of Donne’s thought to be traced across the three years covered here; rather, controversy sits side by side with meditations on the beatific vision that will be afforded the believer after death, and warnings against the dangers of excessive ‘curiosity’ with extravagant displays of learning.

Preaching – its significance as a conduit of grace, a defining characteristic of the English Church, and a means of reminding the congregation of that which they already know in their hearts – is a frequent and self-conscious object of Donne’s attention in these sermons; so too are its limitations, whether from an inattentive and unreceptive auditory (a problem addressed in part by the operation of the Holy Ghost, the Whitsunday sermons argue) or from one which hunts after mere-eloquence and falls into sermon-gadding (see especially Sermon 12). A subject which is at its most basic level a very practical one for a preaching cathedral Dean – and which leads Donne in several sermons to assert the necessity of church discipline, including the controverted topic of kneeling – is nonetheless also the foundation of more apparently abstract discussion. The process of hearing and learning through sermon-attendance is shown by Donne to relate intimately to wider but equally vital questions concerning the definition of knowledge and ignorance, which he then connects to the nature of the will, and the operation of saving grace. It is entirely in keeping with the tendency of Donne’s late preaching to extend the efficacy of Christ’s atonement as broadly as possible that these potentially technical discussions are always ultimately directed to the pastoral needs of his hearers – for example in a detailed engagement with St Augustine on charity and love in Sermon 7, or the depiction of the visio Dei which ends Sermon 8. For Donne, in this volume as almost always, charity begins at home, with the care of one’s own soul in a relationship of harmony with one’s fellows, and his anti-Calvinist position is driven by a determination to prevent the twin dangers of falling into a state of presumption or despair (see especially Sermons 7 and 10).  Such a concern with pastoral care is displayed most strikingly of all in the final sermon in this volume, dated to Candlemas 1630.  Its text (Matt. 5: 16) opens the way to controversy with its mention of ‘good works’, and Donne takes up the challenge. He counters Roman Catholic accusations that the Protestant churches have undervalued good works, and outlines a moderate position on the status of church ceremonies, but is more concerned to establish what is properly meant by a good work.  This is shown to consist in the acknowledgement that works are not properly your own, since they – like grace – come from God, and that their goodness derives from the end to which they are put (a familiar Augustinian argument).  Their performance is thus redirected from the sphere of justification to that of commemoration (of what God has done) and imitation (of God’s goodness), and finally to the glorification of God in one’s daily life. Once again, as so often in the sermons contained in this volume, a text or topic which could so easily lead to ‘curious’ disputation is brought home to the duties of the individual as a member of the cathedral congregation, but also of the Church of England, and of the universal church which they inhabit in and after time.