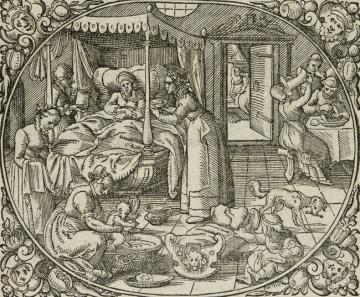 The table of contents for Fifty Sermons (1649) groups these sermons together as the first in the folio, under the headings ‘Sermons Preached at Mariages’, ‘Sermons Preached at Christnings’ and ‘Sermons Preached at Churchings’. The arrangement highlights the importance of the liturgical context of these sermons for early modern readers, a context obscured by Potter and Simpson’s decision to scatter the marriage sermons across three volumes, and to group the others together with sermons of unknown or uncertain date. The Oxford Edition offers a fresh opportunity to bring these sermons together and reconsider the liturgical setting and social occasions of their preaching. Potter and Simpson did conduct basic research verifying the dates, participants and locations of the marriage and churching sermons—there is, regrettably, no evidence available for the christening sermons—but in their search for poetic echoes and literary style they give only cursory attention to the social, liturgical, and theological influences that make these sermons, as a group, significant for twenty-first century researchers.

The services for marriage, baptism, and the thanksgiving of women after childbirth in the Book of Common Prayer played a significant social function in early modern English society. They marked points of transition in the lifecycle, and were also occasions at which families displayed and confirmed their wealth and social status to the community through feasting and exchanges of gifts. These occasions cemented family alliances, and marked moments when social and financial futures seemed bright: the conclusion of a marriage, the birth of a child, the safe recovery of a fertile mother after childbirth. This editor will expand on the basic research conducted by Potter and Simpson, considering in greater detail the social networks that can be traced on each of these occasions, and Donne’s role in those alliances. The volume will build on Volume VI’s discussion of patronage circles and in particular Donne’s links with James Hay, Viscount Doncaster, but will narrow the focus to the significance of these particular occasions in an effort to underline the complex intersections between liturgy, social gathering, kinship relations and patronage. This volume will also cover connections that are particularly highlighted by these occasional sermons, to the Earl and Countess of Bridgewater; Sir Frances Nethersole; Sir Henry Goodere, his daughter Lucy and her godmother the Countess of Bedford; and the Washington family who were clients of the Doncasters.

Bringing these sermons together also provides an exciting opportunity to expand on existing scholarship on Donne’s women patrons, which has centred on his poetry and largely ignored his religious prose. Women’s political influence was frequently exercised through such prominent social and familial occasions, brokering marriages and standing as godmothers and as companions to women coming to be churched. Donne was most likely invited to preach at the marriage of Margaret Washington by her mistress Lady Doncaster, who had negotiated the match and publicly showered Margaret with gifts; it is possible that securing a sermon from Dr Donne was merely another example of the Doncaster generosity. Donne’s intricate connections to the women and men involved in these ceremonies amply illustrates the complex gendering of political and social patronage networks in this period.

The ceremonial context of these sermons also offers an opportunity to add to the ongoing scholarly debate about Donne’s religio-political allegiances, not yet a prominent concern in the fifties and sixties when the California edition was produced. The baptism, marriage and churching services in the Book of Common Prayer had each sparked theological controversies that continued in Donne’s time. Donne enters cautiously into these debates, clearly demonstrating his liturgical conformity without displaying particular enthusiasm for sacramental ceremony. In the first christening sermon, for example, he advises the church to ‘admit any representation of Christs crosse, rather than admit the true crosse of the devil, which is a bitter and schismaticall crossing of Christ in his Church: for it is there in his Church, that he leads us to these waters.’ Characteristically, Donne does not dwell in this passage on any sacramental benefits of signing with the cross. Rather, he chastises those who would provoke liturgical conflict and ‘bring a bitter taste’ to baptism, which in its essence remained a potent symbol of fundamental Christian unity. Donne’s position in the churching sermons is similarly cautious. He does not dwell on the controversies around the origin of the service in Jewish purification rites, or the survival of those rites in the social customs that enforced isolation on new mothers and implied that birth rendered a woman ritually unclean. As Jeffrey Johnson has argued, by expounding at length on the process of repentance and sanctification, Donne tacitly reinforces the implication of the prayer book service that churching is an opportunity for thanksgiving and repentance following a frightening life event, not a purification ceremony or a re-incorporation into the community.

As well as illuminating Donne’s position on church ceremonies, these sermons provide evidence of Donne’s perspective on a wide range of theological and doctrinal concerns. The christening and churching services provided a chance to remind individual Christians of the basics of the faith and of their duties in daily life. In his christening sermon on Ephesians 5:25-27 Donne echoes the Book of Common Prayer’s note on the liturgical context of baptism, commenting that christening sermons ‘raise the whole Congregation, to a consideration, what they promised by others, in their baptisme’. Donne’s christening sermons do indeed cover a range of theological fundamentals, including the atonement, sanctification, the Trinity, and Christ’s love for the church. He also comments on other matters that are pertinent to the occasion, such as the fate of infants that die unbaptised, and some that seem less pertinent, such as Christian marriage.The churching service was not as commonly followed by a sermon as baptism, but because it was the only prayer book ceremony set aside for giving thanks to God for everyday deliverance it provided a similar opportunity to remind the congregation of the fundamentals of faith. It is not surprising, then, that Donne’s churching sermons reflect on the Christian response to God’s salvation in repentance. Recent Donne studies, and particularly the work of Jeanne Shami, have urged scholars to reconsider the theological import of Donne’s sermons within their specific and multivalent contexts, and the close connection of these sermons to liturgical occasions presents a significant opportunity to answer that call. In addition, although marriage and funeral sermons abound from this period, relatively few christening and churching sermons survive, so these examples by Donne also offer a chance to consider more generally how an early modern preacher approached these ceremonies.

Shami’s assessment of the shortcomings of Donne sermon scholarship applies particularly to studies of the marriage sermons, which have tended to use Donne’s poetic misogyny as the sole context for reading these complex texts. This volume will reconsider both Donne’s construction of gender roles and the role of gender in the marriage sermons by placing them in their liturgical and occasional context. The marriage service specifically instructs that couples should hear a sermon ‘wherein ordinarily, (so oft as there is any marriage) the office of a man and wife shall be declared, according to Holy Scripture’, or the rather strident official homily if no preacher was available. Donne’s marriage sermons do provide significant evidence to answer the vexing question of how he viewed ‘the office of a man and wife’, but his views here must be read not only alongside his own poetry, but in light of ongoing early modern theological debates about marriage and the role of women that are frequently over-simplified in literary scholarship. Although Donne is undoubtedly misogynistic for twenty-first century readers, in comparison to early modern prescriptive texts these sermons are both moderate and idiosyncratic in their view of women and gender relations, and those views are inflected by significant moments of humour. In addition, in each sermon Donne sets his comments on marriage within a wider framework of theological commentary, and clearly signals that the most important message of these sermons is not ‘the office of a man and wife’ but the fundamentals of faith. When the Washington marriage sermon was reprinted in Six Sermons (1634), for example, it appeared simply as a sermon on Hosea 2.19, with no reference to its original context. Some Donne scholarship implies that these sermons were primarily a chance for the preacher to put women in their place—as other preachers had done on similar occasions—but in fact these sermons contain some of his most compelling meditations on God’s saving love, and the complex interaction of those meditations with his theology of gender demands reconsideration.